– How to play crazy eights

If you are wondering how to play Crazy Eights, we are happy to tell you that you are at the right place! On this page, we will teach you all you need to know about this popular shedding game.

But wait for a second! Now you might be thinking, what business does a site dedicated to the Uno rules have in writing about this old card game?

If you are, then we recommend you check out our short article about the history of Uno. In that article, you will find that Crazy Eight, in fact, is the forerunner to Uno! In other words, it makes a lot of sense to explore the game that made Uno what it is today. 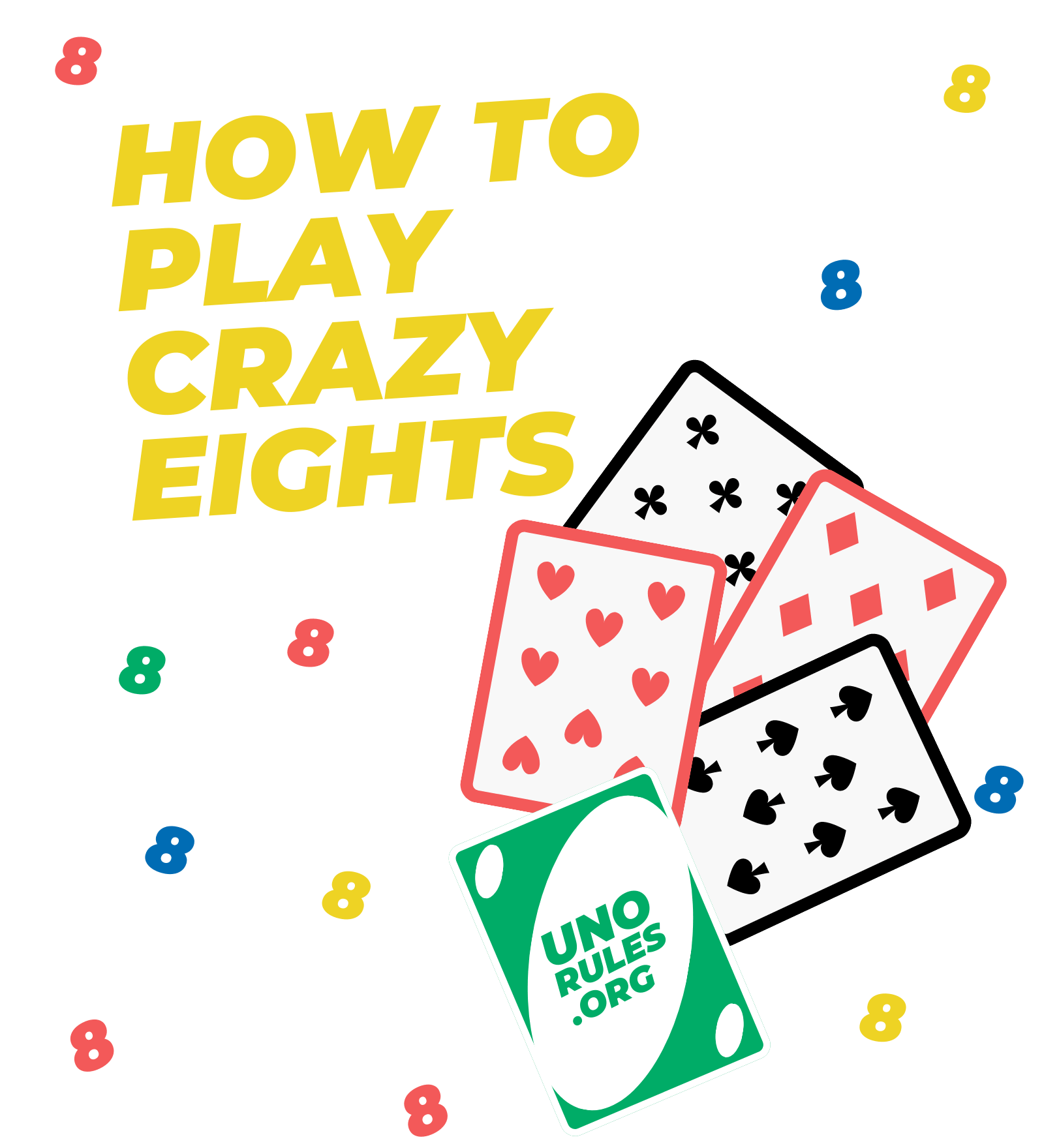 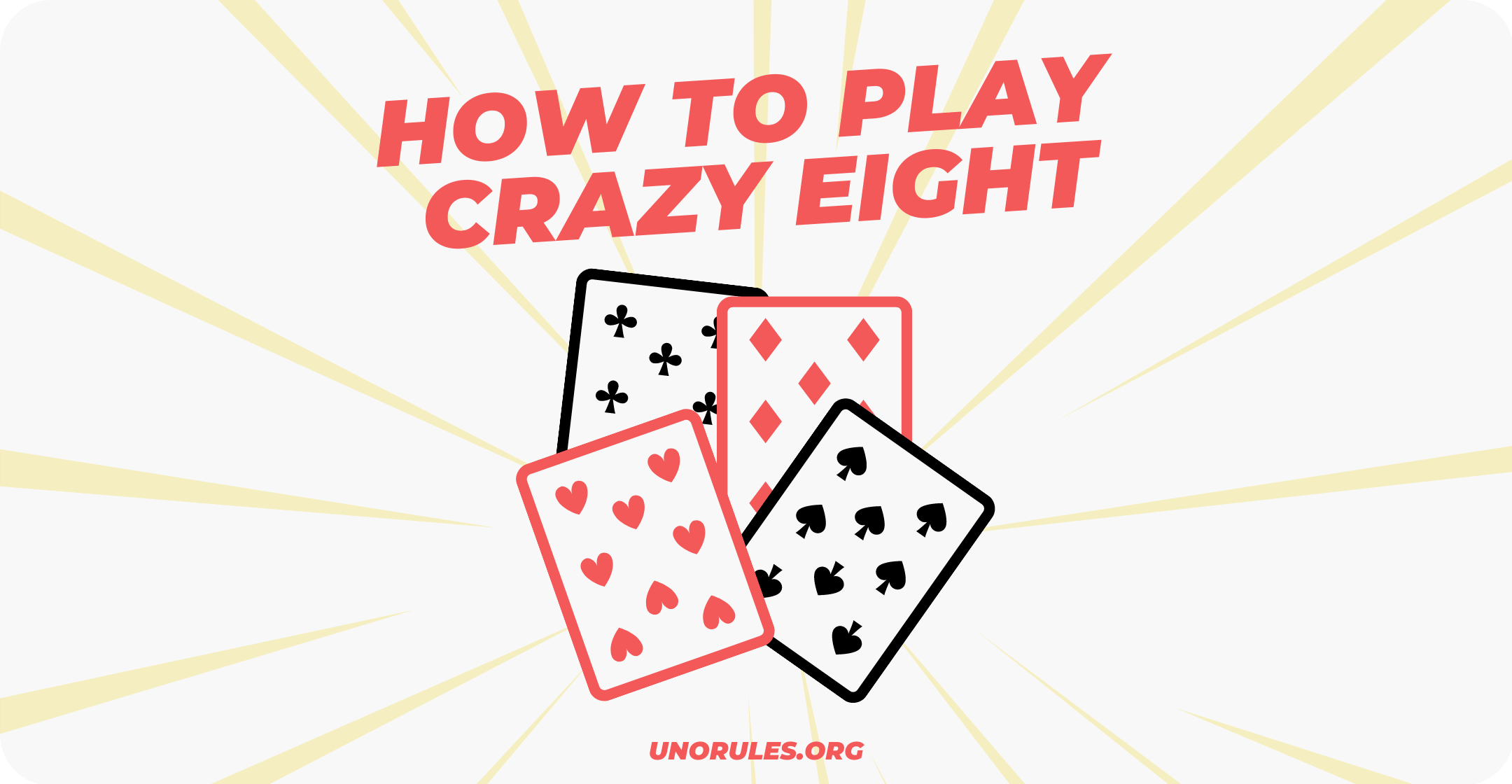 How to play the Crazy Eights card game

There are several different ways you can play the Crazy Eights card game, and just like with Uno you can add your own house rules. We will explore two versions, a simple version, and the more advanced version. The advanced version of the game has a couple of additional rules but is not that hard to grasp and is very similar to the Uno rules.

But before we explore these versions, lets start by looking at the basics, which are the same for both games.

To play the Crazy Eight card game, you will need:

You can start by removing the jokers from the deck. These are not used in the basic game but are excellent cards if you want to add some house rules to the game. For those of you that don’t know what the house rules are, you can check it out here: What are the house rules in Uno?

Just like Uno your goal is to be the first player to get rid of all the cards in your hand. The player that does this wins the round. If you are keeping score you sum up the value of the cards on the rest of the players hands after each round. More about scoring in a bit.

Start by dealing five cards each, face down. If you are two players playing you can deal seven cards each. The rest of the cards should be placed face down in a draw-pile on the table. This is where you will draw your cards.

Take the top card from the draw-pile, turn it around and place it next to the draw-pile. This is the discard pile and for all of you Uno-veterans out there this setup should be very familiar. If the first card drawn is an Eight you should return it to the middle of the deck and draw another card. As the name suggest the Eights have a key role to play but more about the special cards in a second.

With each player holding 5-7 cards at hand, a draw pile and a discard pile you are ready to start playing! 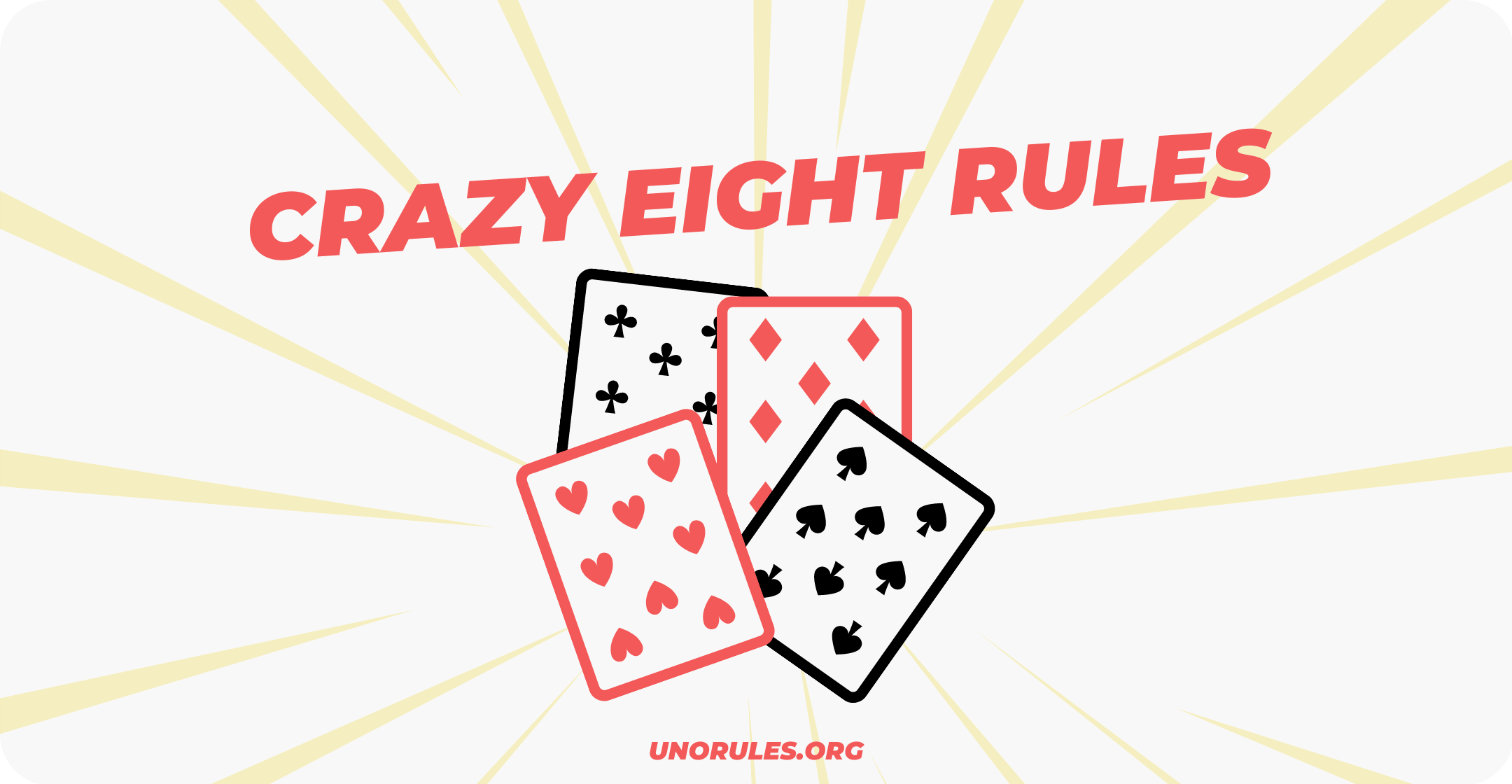 The player to the left of the dealer starts the game by placing a matching card on the discard pile. The game continues clockwise, and each player must play a card, or if no card is matching, draw up to three cards from the draw pile.

The following plays are allowed:

Example 1: If the card on the discard pile is the Queen of Hearts, the next player can play:

Example 2: If the card on the discard pile is an eight of spades and the player that played the card nominates another suit, a Diamond, you can either play another eight (and change suit again or keep the same suit) or any diamond card. Note that the Eight suit does not matter; what matters is the suit nominated by the player.

If you can’t play any card

We have to point out that the rules are a bit different depending on who you ask and further down we talk about different Crazy Eights house rules where we present different versions of the draw.

Just like in Uno you have to declare that you only have one card left on your hand when this is the case. You do this by saying “last card” and if you fail to do so you must draw two cards from the draw pile as a penalty.

How to win and score Crazy Eight

You play until a player gets rid of all their cards. That player is the winner of the round. After the round you count the points off the cards that each player have left on their hand. These are penalty points meaning that you want to have as few points as possible.

The winner of the game is the player that have the least amount of points when the first player reaches 100 points.

The winner is Lisa since she has the least amount of points.

The scoring is pretty easy:

Remember that we talked about two versions of the game, the simple version and the advanced version? Until now we have described the simple version of the game with the only special card being anyone of the Eights. This version is fun in itself and easier to learn, especially younger children.

However there is a more advanced option which have more special cards which ads another dimension to the game. It is not much harder to learn especially if you have played Uno before. 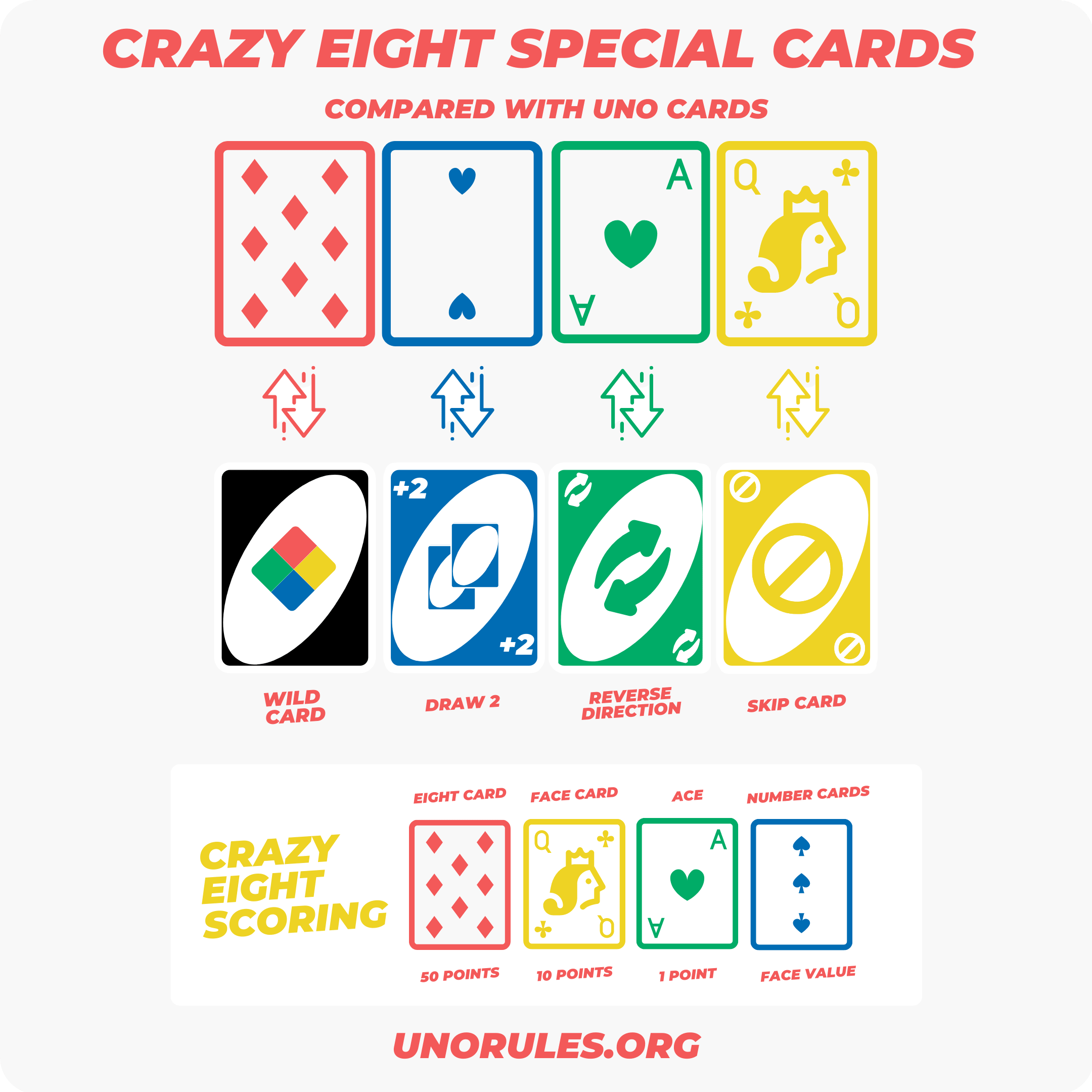 As you already know the eights are a special card that allows you to change suit just like the wild card can do in Uno. However if you are a Uno veteran you know that the game consists of more special cards and so does the advanced version of Crazy Eights.

If one of these cards is drawn as the first card you have two options:

If the last card played is a special card it is simply ignored (in contrast with the Uno rules and the Uno attack rules where a player must draw the penalty cards before the game ends).

When a Queen is played, the next player’s turn is skipped. Instead, the turn passes to the next player. If you are playing one vs. one, the player that played the Queen plays again.

If you play an Ace the direction of play reverses. Note that in a two player game this card has no effect. 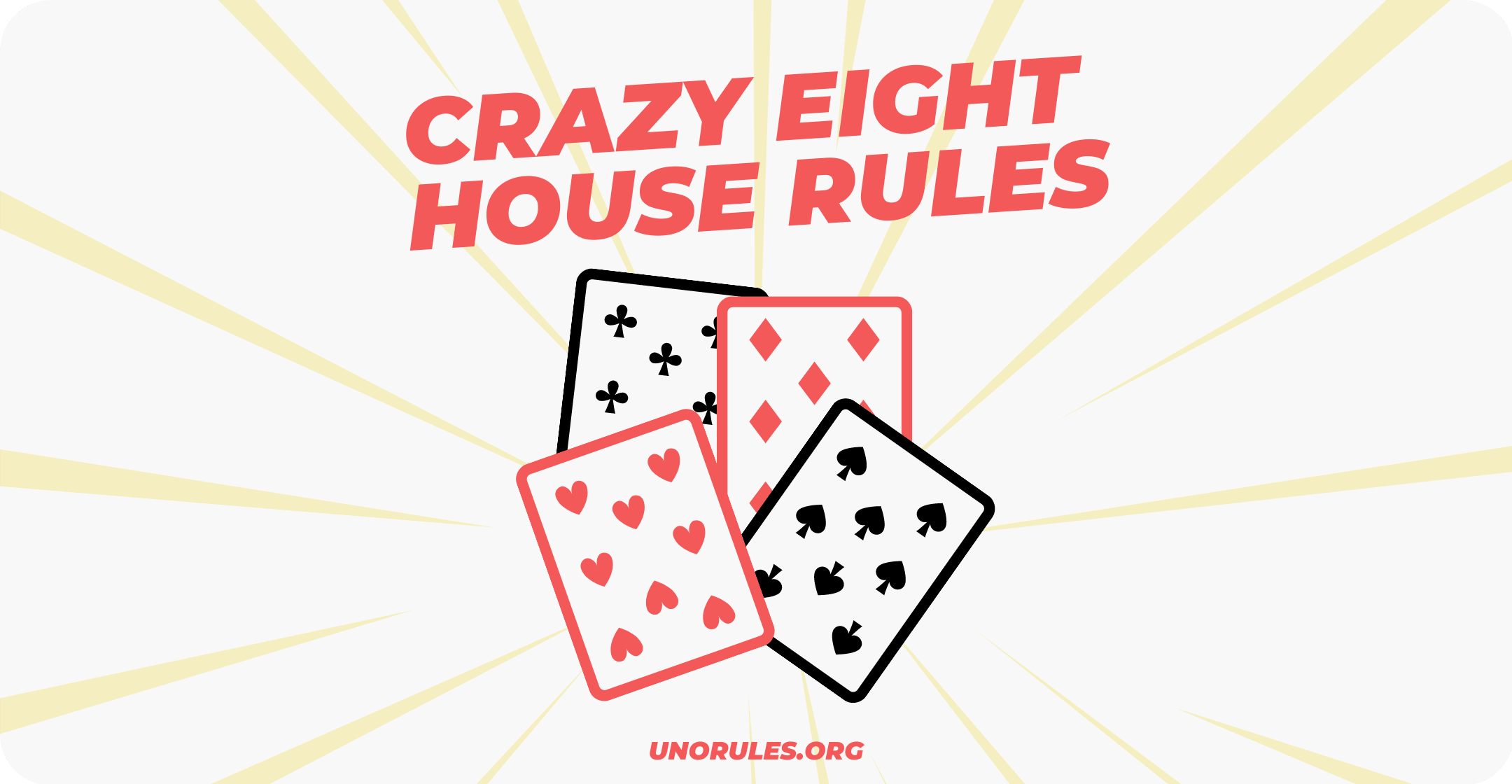 The fun thing with Crazy Eights and Uno are that both games have flexible rules that you can modify in an easy and fun way. Below you will some common house rules but remember that these are just some examples and that you can alter the game however you want!

Some choose to start the game with eight cards instead of 5 or 7 cards.

In the standard rules, if you can’t play a card, you have to draw up to three cards. This can be modified to any number you want. A common rule, similar to Uno, is that you draw one card. Another version is that you need to draw cards until you can play one.

In the normal game, you are allowed to draw a card even though you have a playable card on your hand. This rule can be modified so that you only may draw a card if you are unable to play a card.

If the deck is exhausted, the normal thing to do is to shuffle the discard pile and make a new draw pile; however some versions don’t do this,s and if you can’t play a card your turn is skipped. If no one can play a card you add up the points on your hand to the score table and start a new round.

If you want to make the game even simpler you can skip the rule that you have to say “last card” when you have one card left. This might be suitable if you are playing with younger kids.