– how to play spicy Uno

If you love to play Uno, you should have a look at a version of this classic game called Spicy Uno.

Spicy Uno is not an official game but a regular Uno game with some additional house rules that has become very popular.

This game comes with two significant differences from the original game. But the difference between Uno and Spicy Uno is a little bit more than that. There are several other rules you can choose to add making this version a bit more spicy and exciting!

The best part? You only need your regular Uno playing deck!

Let’s have a look at how to play Spicy Uno. The first thing you need to know is how to play Uno. 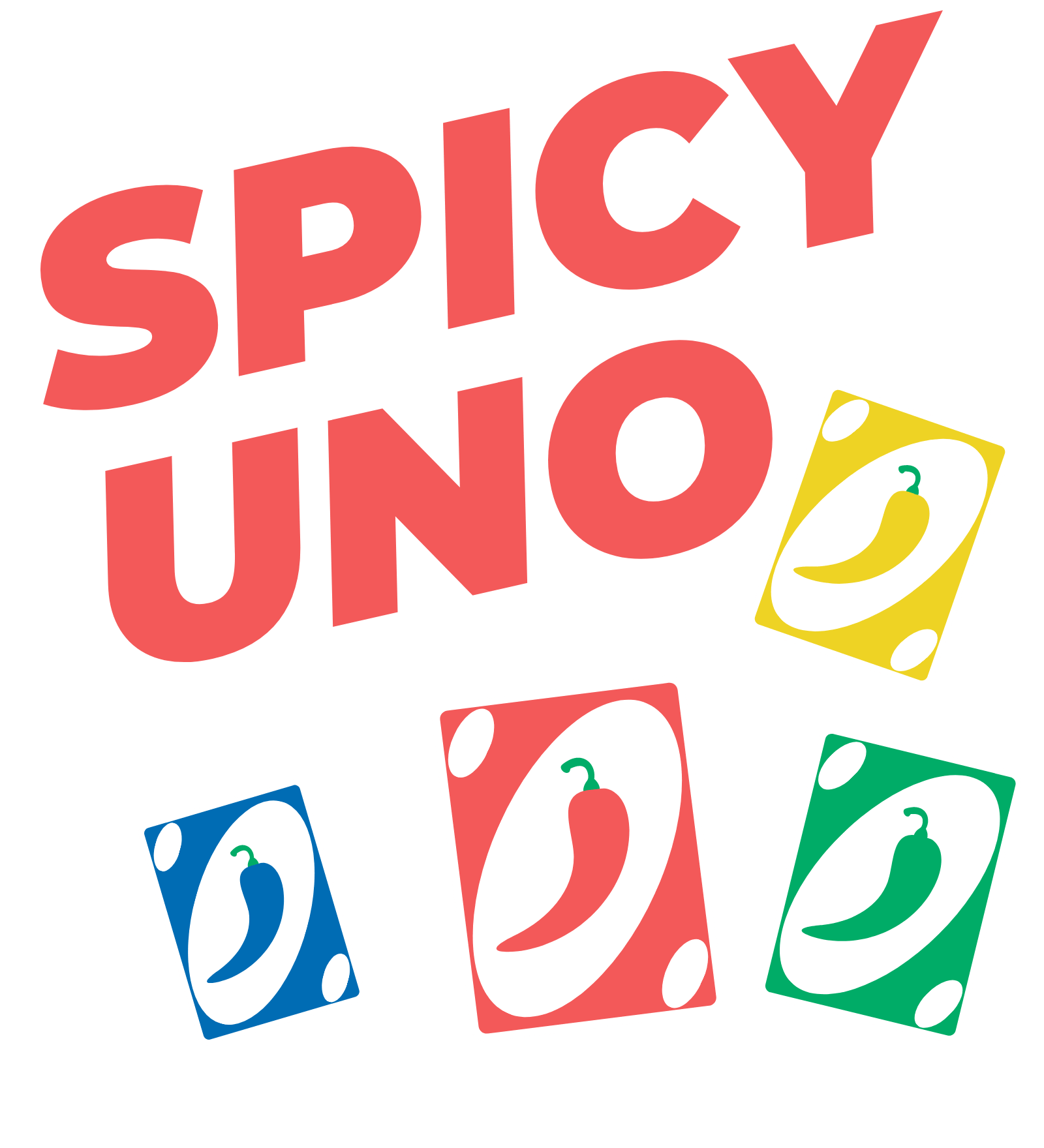 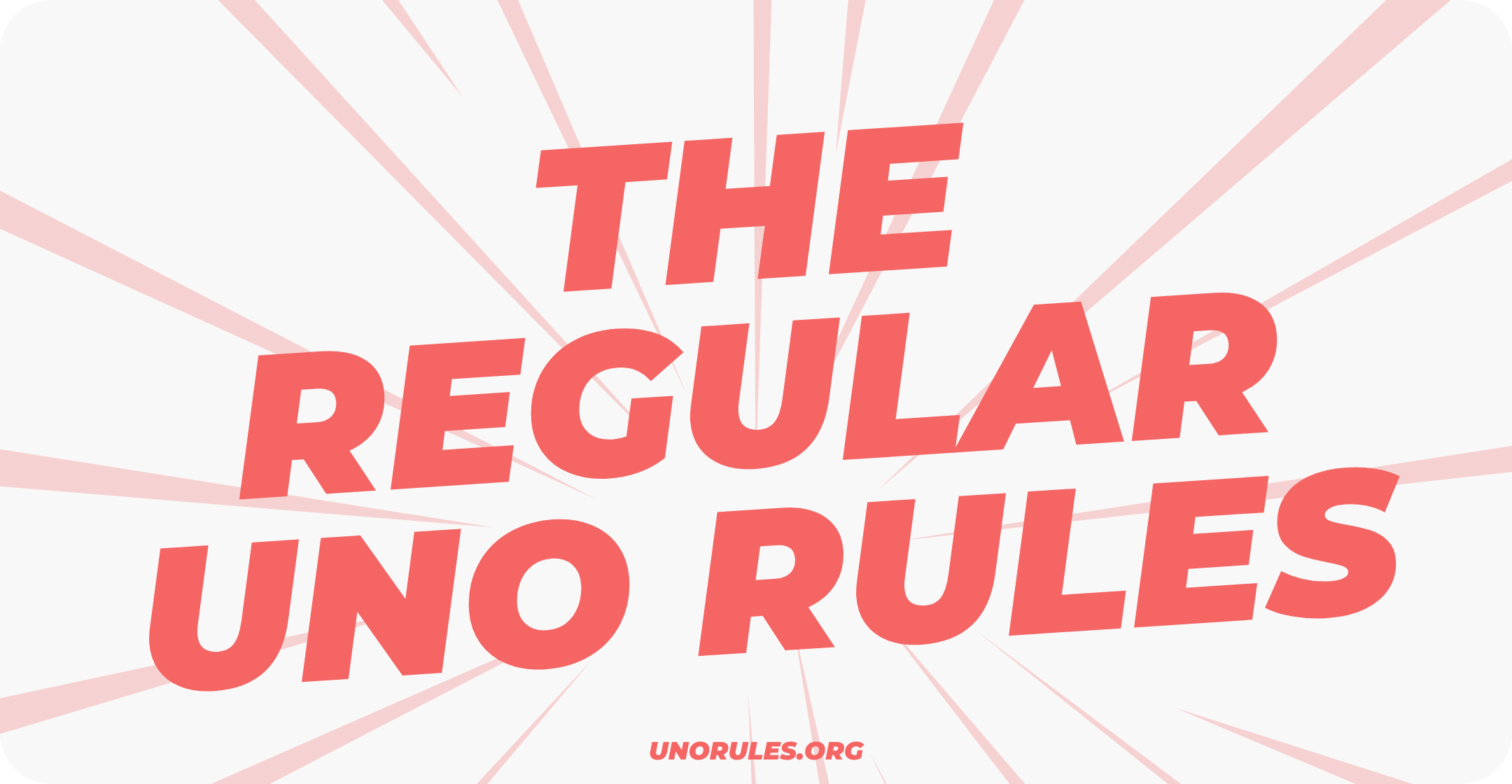 The regular Uno rules in short

Let us look at the regular Uno rules to remind yourself how to play this game before adding on the special Spicy Uno rules. Uno is played with 2-10 players. The game’s goal is to get rid of all the cards on your hand to win the round.

You can read our Uno rules walkthrough or download the Uno Rules PDF but a lot of our visitors appreciate the unorules.org quickstart guide to the original rules to Uno, which you can save on your phone, computer, or print out: 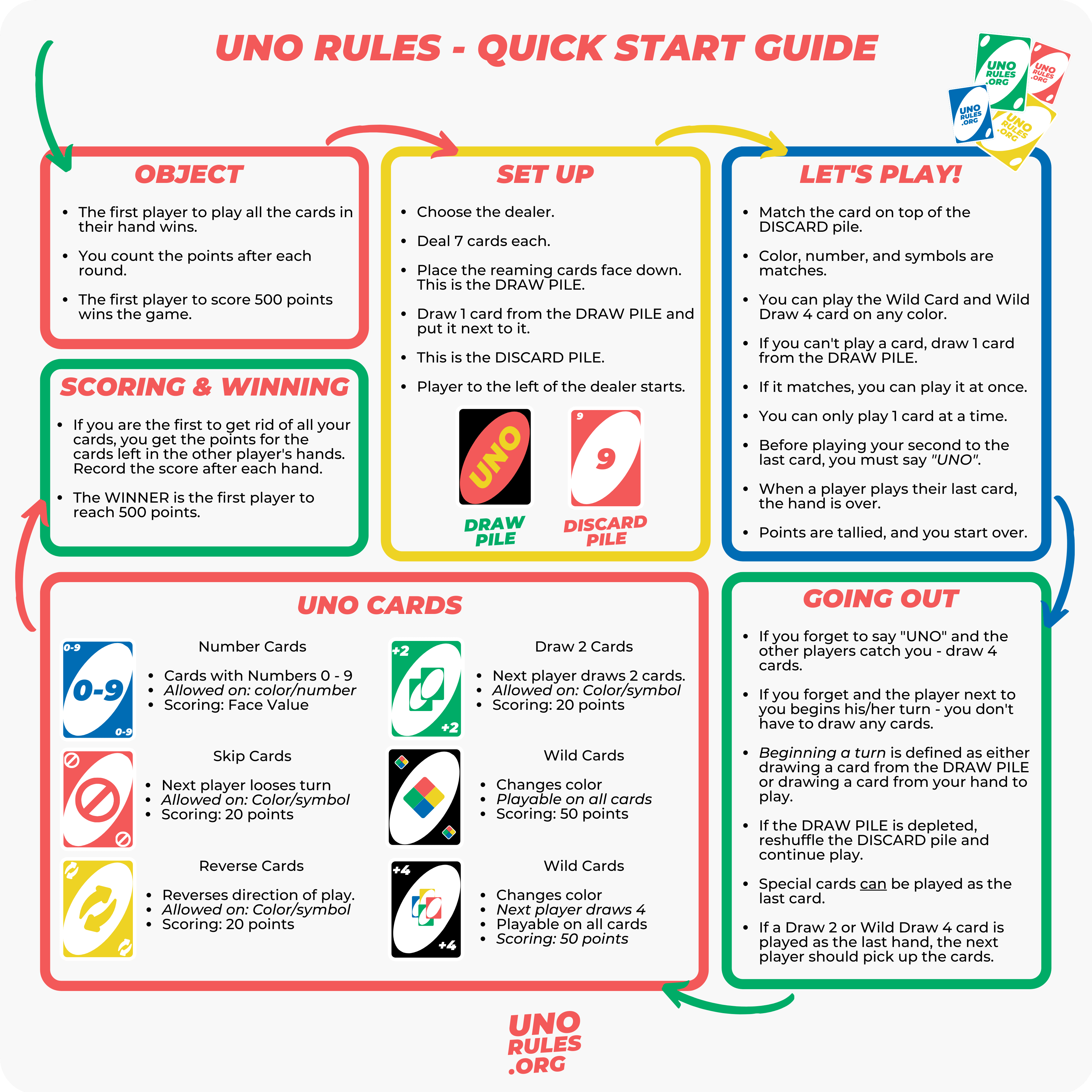 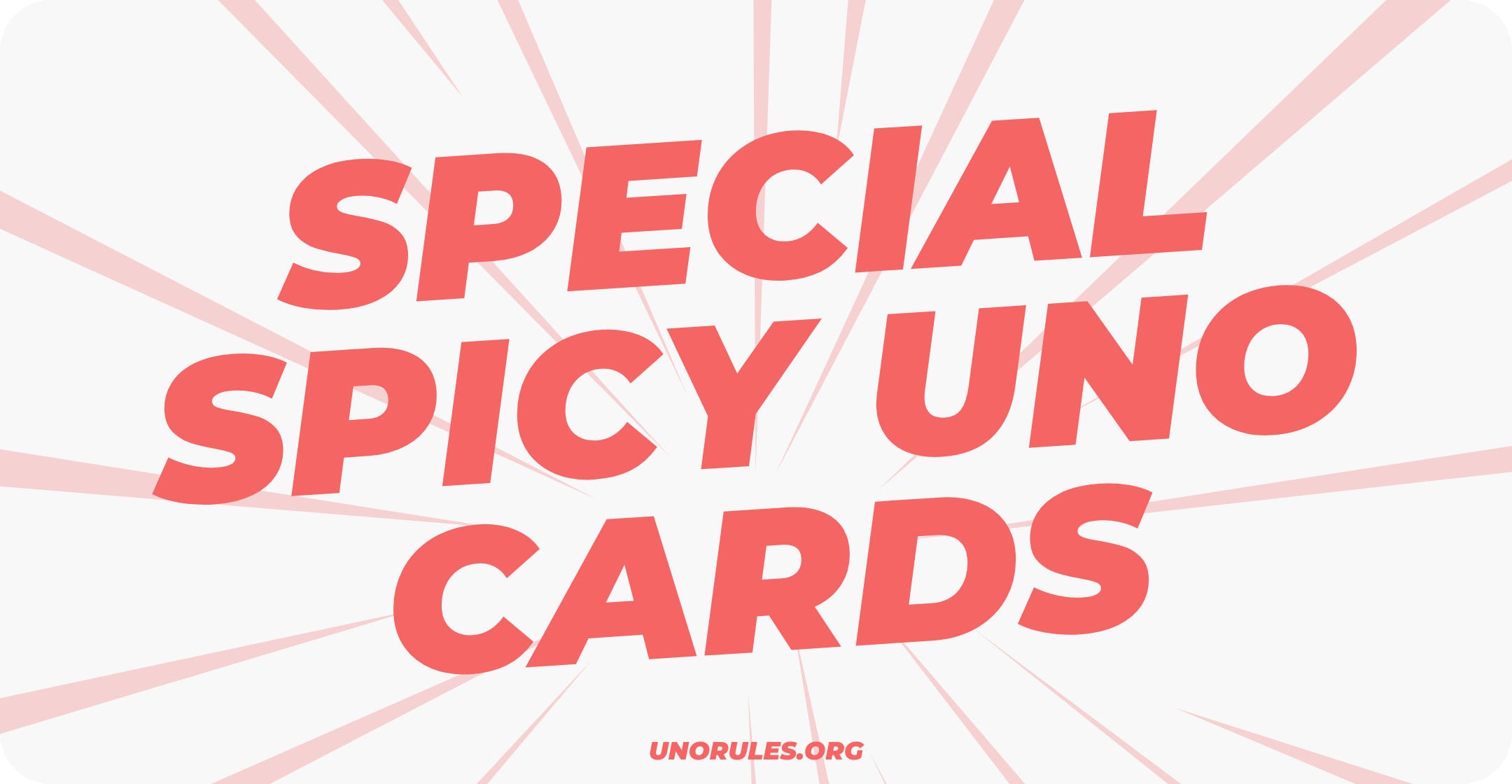 In Uno, you have 4 special cards; this is the same in Spicy Uno. These cards are:

The Uno Skip Card can be played on a matching-colored discard card or on a previous Skip card. When you play this card, the next player’s turn is skipped.

This card can be played on a matching-colored discard card or on another Reverse card. With this card, the direction of the play is reversed.

This card can be played on a matching-colored discard card or on another Draw 2 card. When this card is played, the next player has to draw 2 cards from the draw pile, after which the move goes on to the next player. 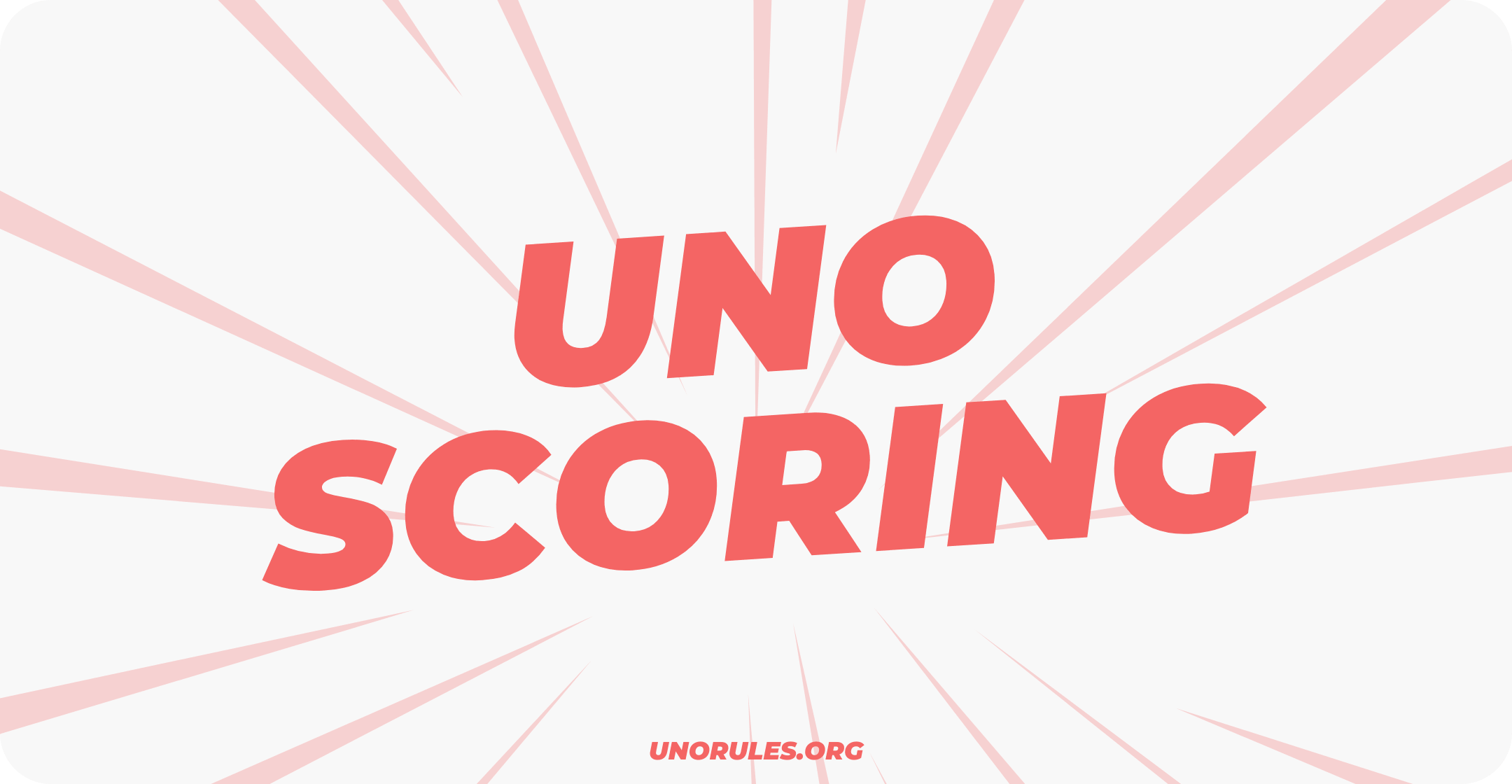 The player that wins the round is awarded points based on the cards remaining in the other players’ hands.

The point values of the Uno cards are as following:

Use an Uno scoring card to record the points for each round. You can find the unorules.org free Uno scorecard here If you don’t have special Uno score sheets for the Spicy Uno card game, you can always draw one on a simple sheet of paper. 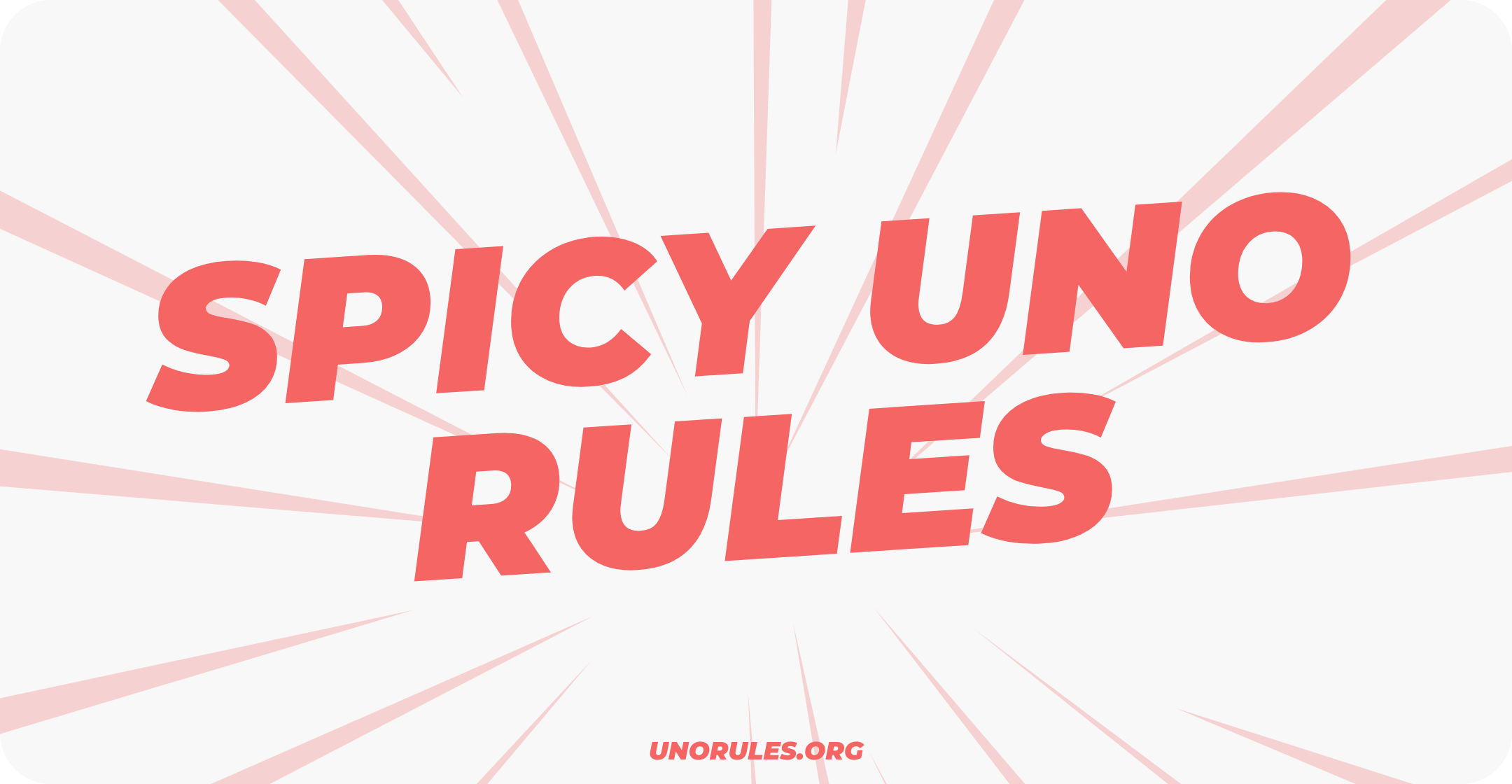 Rules on Spicy Uno that makes all the difference

If a red card of any kind is played, no one can talk. If you forget and say something after the red card has been placed on the discard pile, you will have to draw a card for every word that you say! As soon as someone puts a different color on the discard pile, everyone can start talking again!

When you have one card left

When you have one card left and need to say, Uno, you can’t do so with a red card on the discard pile. Instead of saying Uno, you will have to wag your finger in the air. If you forget and say the word Uno, you will draw a card because you uttered one word. The same is true if you don’t wag your finger and anyone notices (even though they can’t utter a word themselves). They can point out that you did not wag your finger by pointing the finger at you.

The other rule for Spicy Uno has to do with the 6 cards. Whenever a card with the number 6 is placed on the discard pile, everyone has to slap their hands on the table. The last person to pound the table has to draw 2 cards.

If you lay a 6 on the discard pile, you need to remember to slap it right away. After that, you keep track of who is the last one around the table to slap their hand on the table. 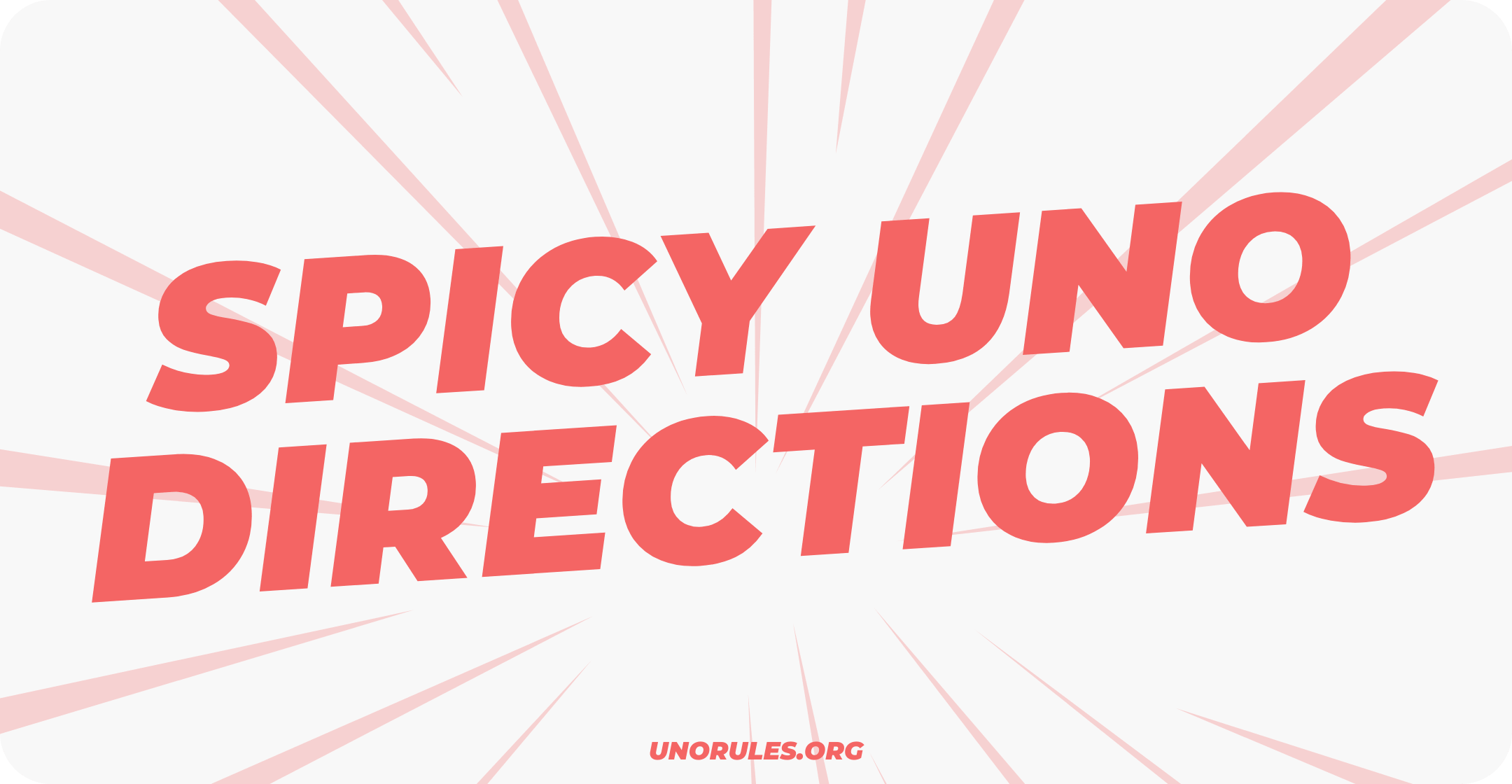 You could try and play Spicy Uno online, but that will sort of miss the point. What makes Spicy Uno so much fun is the interaction in real-time around the table. Try slapping your screen and see if anyone notices…
Even if you find a Spicy Uno online game with buttons for slapping or some function to announce silence, it will never be the same.

Also, know that Spicy Uno is best with many players. Can you play Spicy Uno with 2 players? Certainly! But the fun comes from all the mess and catching people talking when they shouldn’t. In Spicy Uno, the more, the merrier! 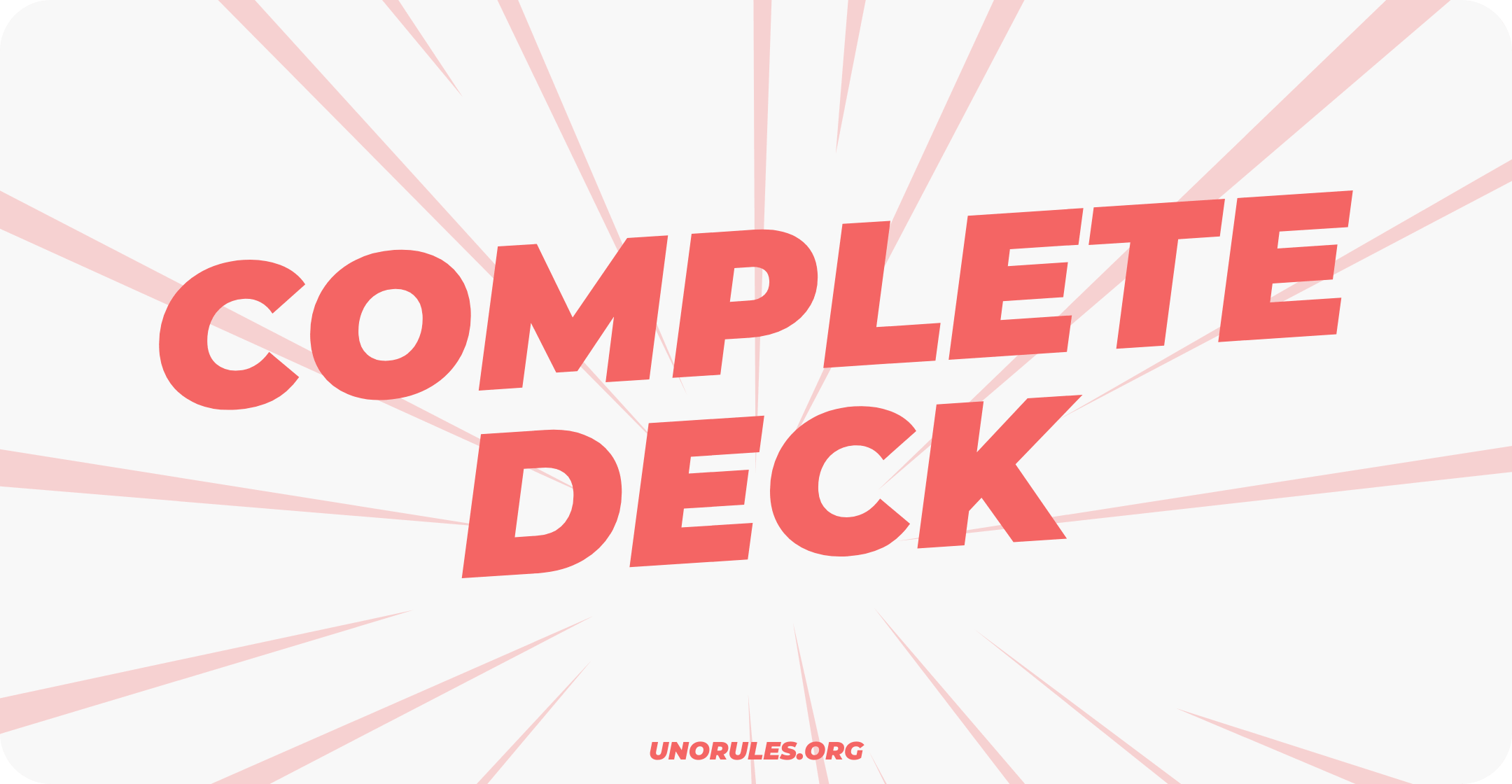 Make sure to have a complete deck of Uno

Before you start playing Spicy Uno with a group of friends, make sure that you have a complete deck of Uno to play with. If you have an Uno Flip deck, this can also work. Just make sure everyone understands what Uno rules you are playing with. 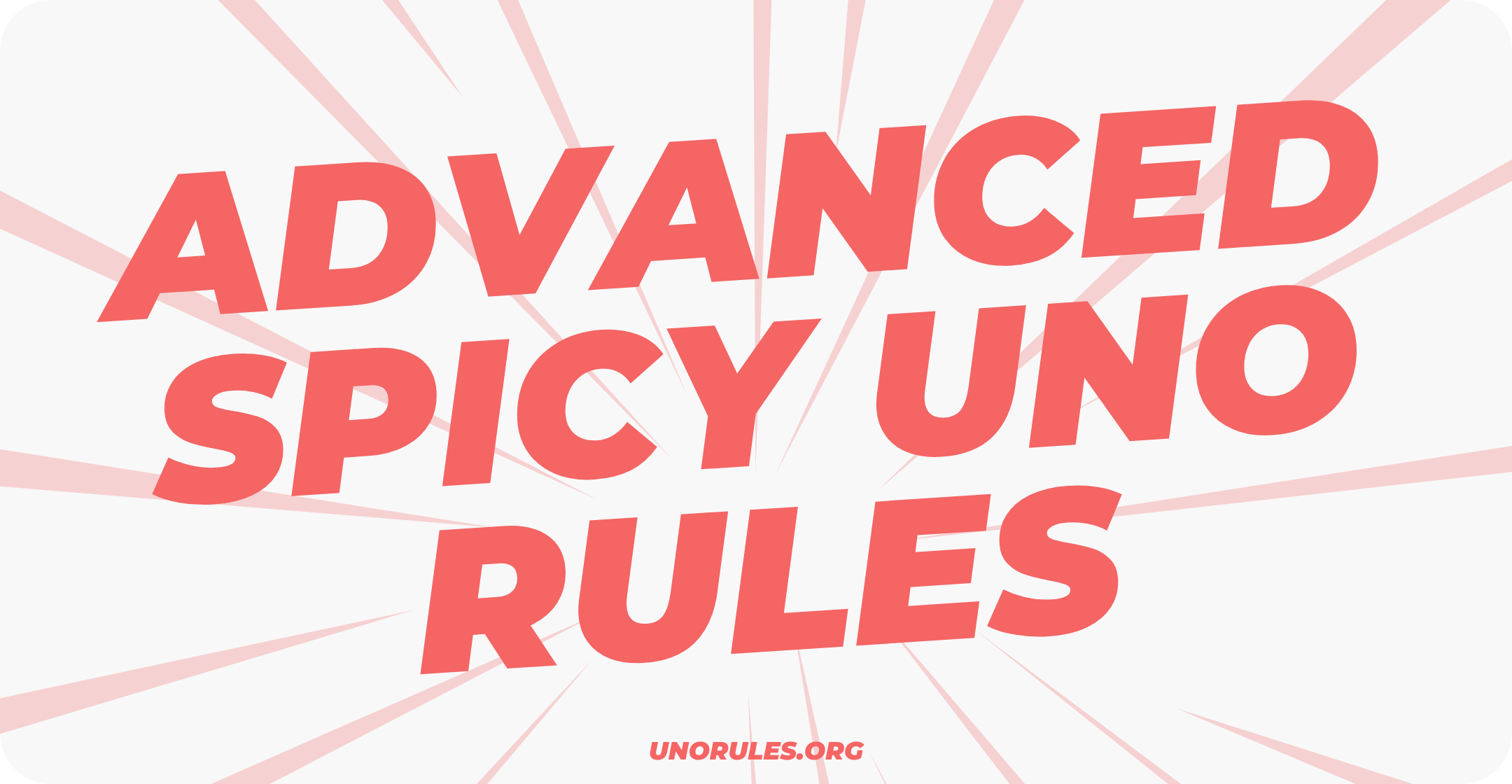 We have just described the official Spicy Uno rules, but there are versions of this Uno game, and you can add on another set of rules to make it even more fun.

You can play with the following Spicy Uno game rules:

7 for silent instead of red

It is pretty common to use the 7 as the signal for silence rather than the color red. This might shorten the time of the silent period if any other card leads to the break of the silence. But you can also play with the Spicy Uno rule that a new 7 must be placed on the discard pile before anyone can talk again.

If you play a 0, you can swap your hand with another player. This is optional. If no one wants to swap hands with you, nothing happens.

If you have the same card as the card placed on the discard pile, you can quickly put your card on the pile even when it is not your turn. Just as long as you get your card there before another player acts, it is allowed. This is a move that can make people talk when they shouldn’t, so it can be really cool to play with this Spicy Uno rule. 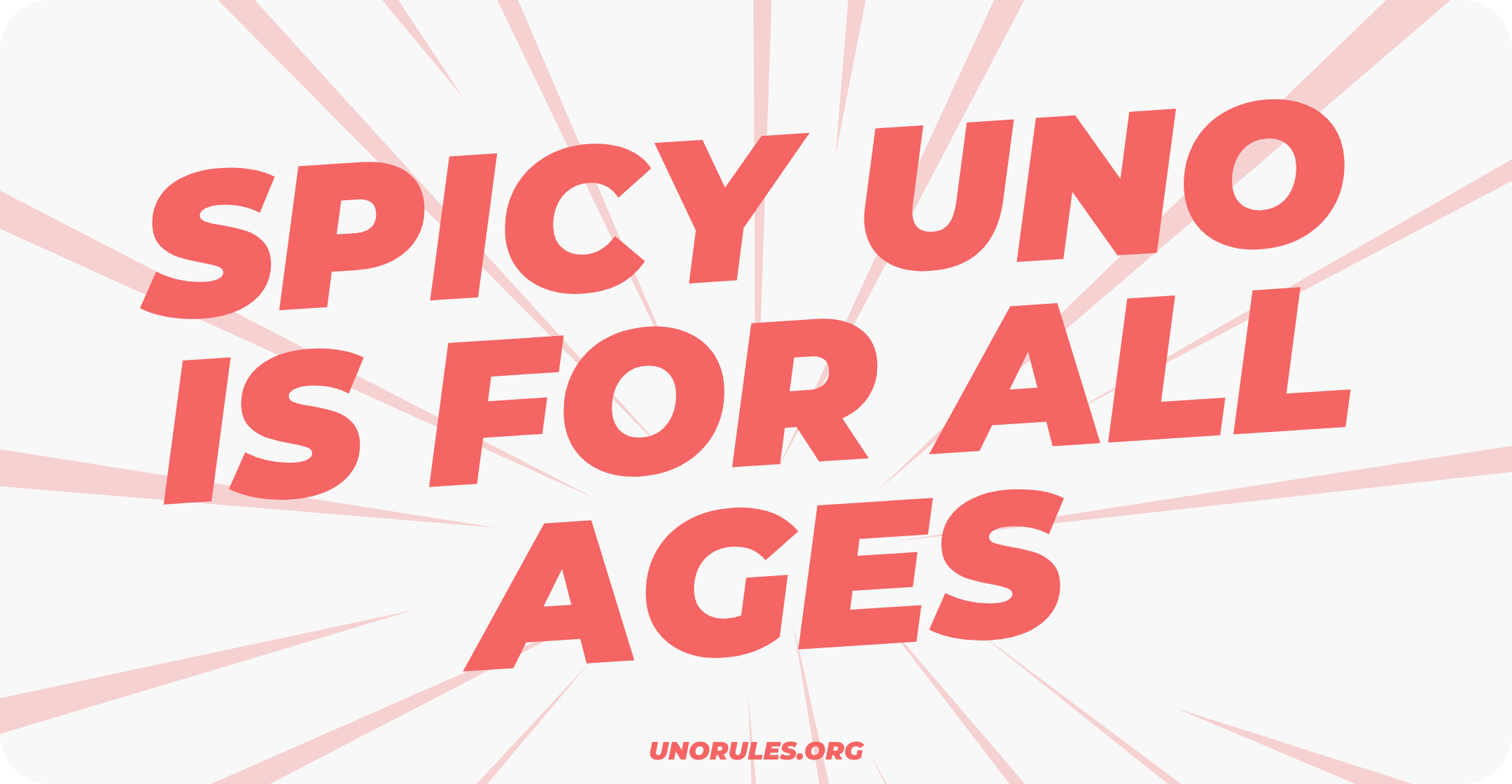 Spicy Uno is for all ages

If you can play Uno, you can play Spicy Uno! With this said, smaller children that find it hard to follow many different rules might get annoyed with all the turns. If you have younger children in the game, you might opt for the 2 official Spicy Uno rules and skip the aforementioned rules.